Motherhood and More: Thinking about a third* 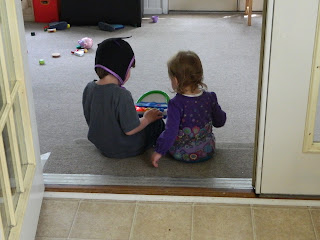 When I was younger, before I knew the ins and outs and all the weird, difficult things that went along with parenthood, I always said I wanted four children.

I wanted to hear all the laughter and the giggling and I wanted to see a passel of children, my children, riding bikes together or kicking a soccer ball or making mud pies. Apparently, in my mind, kids only existed outside.

My husband, on the other hand, only wanted two kids. We decided to compromise and settled on three.

And then I had one. And it was hard. And then I had another one. And it was like life exploded in an endless time suck of feeding and changing and feeding the other one and making sure everyone has clean clothes and the house is sort-of clean, or at least not gross and then the first one needs to eat again and the other one wants more milk and, “Hey, Mommy. Come play with me because I don’t want to play alone.”

So now I’m faced with an existential dilemma. I love my kids. I love how silly they are and how creative and how loving. And I could see myself having a lot more of them running around, but in that daydream they are all at least 5 years old and can wipe their own bottoms.

But then there are hard days, or more accurately, weeks. And I can’t see how I can take care of the ones I already have.

Recently this whole parenting thing has been especially hard as my youngest has woken up repeatedly throughout the night, most unhappy. As far as we can tell she’s getting molars in. Either that or we’re late on her exorcism because, as almost any parent will tell you, sometimes that seems like the only thing that will help keep these little demons from crawling down stairs backwards and spitting food at your face.

So I’ve been having an internal debate with myself. Do I want another child? Do I want to go through all the discomfort of carrying one, the sleeplessness of the entire first year, the total rearranging of my life again to compensate someone else, be they ever so small and adorable?

Sometimes, when I’m so tired that all I can do is stare at my bed in the hopes that by some miracle I can lie down in it before 10 p.m., the answer is no. No, I do not want to go through that hardship again.

But then my oldest will come up to me when I’m on the ground playing in dirt with him, and put his arm around my neck and say, “I just love you so much, Mommy.”

When that happens, the answer is most decidedly yes. Yes, I want another 10 kids just like you, little man.

But, oh, it’s so hard to forget the 3-year-old temper that can change so fast I’m left wondering what I did wrong as he runs up to his room and slams the door. It’s so hard to forget the endless diaper changes and endless feedings and endless picking up of random crap that some small person has thrown all over the floor, just to see me pick it up.

But then again, my youngest is so affectionate, and will randomly come up to me for a hug, only to squirm to get down when she’s gotten it. She likes to make silly faces to make us all laugh. She loves to read books and play ball and run after her brother while he rides his bike.

And he loves to let her chase after him. He loves to dig in the dirt and climb trees and look for rollie pollies under rocks. And they both love hugs and kisses and bedtime stories and puzzles.

They both are such good, polite, considerate kids. They both are helpful and kind and friendly and so, so sweet.

And while my free time is not nearly where I’d like it to be, and while I just found a raisin stuck to my computer desk from who knows when, I think, after all, that my answer is yes.

Yes. One more just like the other two, please.

Only not until the youngest stops throwing all of her food all over the floor because, my goodness, cleaning that up takes a good chunk of my day.

*This column originally published in The News-Enterprise on April 25, 2012.
Posted by jaimalaya at 6:57 AM

Email ThisBlogThis!Share to TwitterShare to FacebookShare to Pinterest
Labels: motherhood, The News-Enterprise